This empty lot is the once-and-future home of Kaufhaus Tirol, the only bona fide department store in the area. Its original name was Bauer & Schwarz, and was, among dozens of others, a very successful Jewish family-owned business. In April 1938, one month after the Anschluss, the owners succumbed to pressure from boycotts and “aryanized” the business by installing an aryan bookkeeper as director. Within 2 months the business was bankrupt, and bought for a song by a German company.
Co-owner Wilhelm Bauer was one of the victims of the terrors of Kristallnacht, murdered in his home. Many of the family were able to flee the country.

Back to modern times. Although not the only formerly-Jewish-owned business in Innsbruck, this one seems to have had permanent bad luck. Since I have lived here it’s been closed for long-term renovations twice, and now they’ve gone and plowed the whole thing under to start again. Last year there were artist’s renditions of the planned new facade shown in front of the construction site, something that resembled a giant igloo (all white and round) — at some point these plans were scrapped and now the building is to have a more traditional-looking facade, something which will fit in better with the old buildings surrounding it.

As far as I’m concerned, Mayan priests chanting ancient spirit-cleansing prayers couldn’t help this place — it’s cursed. The ghosts of the victims of Nazi terror in Innsbruck are going to hang around and give the place Bad Karma for a long time to come, no matter what fancy new building is erected there. I’m just sayin’. 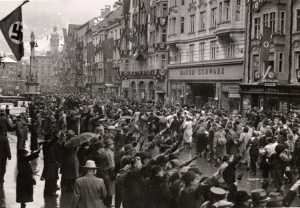 ( On April 10, 1938 Austrians got to vote on whether to join the German Empire officially, and there was much fanfare for the occasion. Notice that the only store in the photograph not decorated to the hilt with swastikas was Bauer & Schwarz, which was not yet aryanized. )

Update: Kaufhaus Tirol has been open for a while now and it’s been doing steady, good business — no longer as one department store but as a mall. Nice to have a Peek & Cloppenburg here.

This entry was posted in Austria, history. Bookmark the permalink.